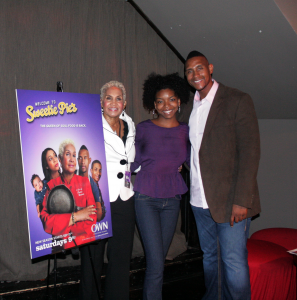 Last Monday night, September 17th, I was invited to attend OWN’s Welcome to Sweetie Pie’s Screening. I had an incredible time and I absolutely love the show. “Miss Robbie Montgomery, an ex-background singer for Ike and Tina Turner, is as sassy and savvy as ever in an all-new season of the hit show, Welcome to Sweetie Pie’s! She and her son Tim are working hard to open their third soul food restaurant – Sweetie Pie’s “The Upper Crust,” and through all of the construction setbacks, the cost escalations, and the family turmoil, this mother/son team are set to pull it off by the skin of their teeth.” Read Full show summary at Oprah.com/Sweetiepies.  I find the show to be both hilarious and of good taste. It has begun its third season with OWN on Sept. 15th, 2012 and we were able to preview the 2nd episode before everyone else! Everyone in attendance were laughing and smiling throughout the entire episode and let me tell you something! The food at this screening, catered by C’est Si Bon! was delicious! I wish I took a picture of the dishes but I was too busy indulging everything on the menu and sipping on a glass of pinot noir wine as I mingled with some of the most interesting people in the world! I’ll just say, the black-eyed peas and  the sweet potato muffins were bringing my taste-buds to life! It was so awesome to

be able to meet Ms. Robbie and her son Tim. I appreciated how genuine they are. They have an admirably loving relationship that is fun to watch. Ms. Robbie let us know that it was Tim’s idea to do the show, initially. She was hesitant at first, but so far, so good; so she seems to be glad that she eventually decided to listen to her son and try it out. Tim reminded us of how much we needed some more positive urban television and how their show contributes to that. That was so refreshing to hear and I truly support and believe in that vision. Overall, I had a great night…Beautiful event! Shout out to our friend Nakia Clarke and her crew at ProWorthy Global! You all did a phenomenal job on this event! Check out all new episodes of “Welcome to Sweetie Pie’s” season 3 on OWN Saturdays at 9/8c and visit: www.oprah.com/sweetiepies. 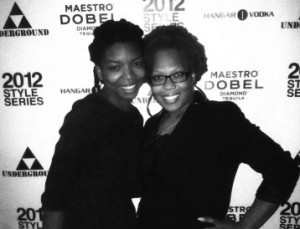 On Thursday night, September 13th, I attended a Fashion Show with Y.A.B.’s Courtney Griffin, called the 2012 Style Series: Inspired Fashion. We definitely left inspired by the Lincoln Park Chicago fashion bloggers during the runway show at Thursday’s Style Series at The Underground in Chicago. Since me and Courtney were both celebrating our birthdays that week, we truly “walked in abundance” as we enjoyed ourselves and all the special perks from reserve seating to free drinks and  meeting awesome socialites of Chicago. This was a beautiful night! The mix of summer and fall colors and the merging of different patterns and cuts on the beautiful models made this year’s collection a definite source of inspiration! Take a peek at some more pics from these cool events below and Always Remember to Stay Inspired! -@MsJaneThang