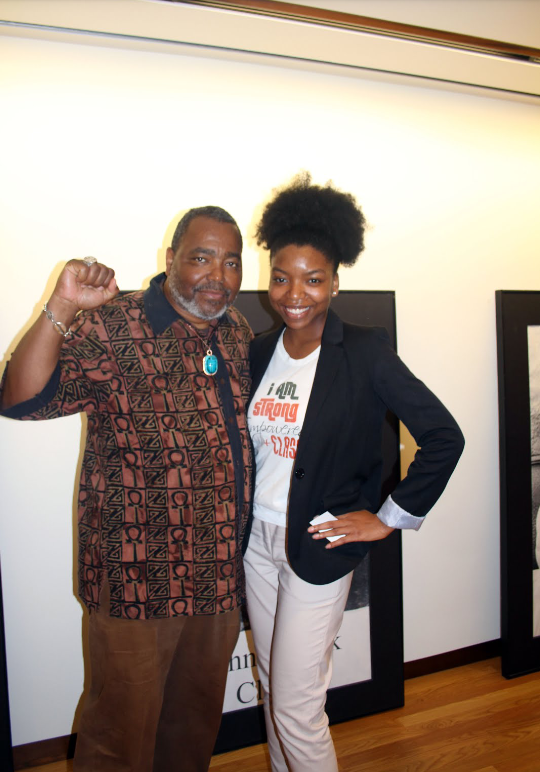 On Monday, September 29, 2014, I caught a cab straight out of work to get to the Jacob Carruthers Center for Inner City to attend the Lupe Fiasco Foundation’s “What’s Your Mission?” Community All Call event. I came hungry for inspiration and a message; even a sign that could keep me empowered over my own mission for Jane Thang Productions, LLC.  My great friend Courtney Griffin of Y.A.B. and #SECproject highlight, came out as well! We were both proudly rocking our “I Am Strong, Empowered, & Classy” t-shirts as we walked into the auditorium full of beautiful people speaking passionately about their organizations, missions, and goals. There were some powerful men and women in the room. I was very excited to sit among them all. Ayesha Jaco, executive director of the Lupe Fiasco Foundation, hosted the discussion and gave such a personal and loving introduction for the speaker that when he walked up, he had to take a moment before speaking to wipe away his tears. Ayesha recalled her and Lupe Fiasco himself being able to call on and look up to Kwesi Ronald Harris, the Lupe Fiasco Foundation’s Mission Ambassador, as a father figure. When he started to speak, I found out why. He stood as a strong black man with incredible energy that caused my mind to focus in on his every word. He dropped so many gems when it comes to being in business to help your community. He highlighted the idea of while working to build a successful organization, it has to be less about me, the individual and more about the mission, which will impact the community. My favorite part of his speech was listening to his story called, “The Truth & The Lie”. I received so much out of it as I let my mind visualize his words. You can it check out here:

Later there was more networking and mission sharing to be had. Lupe Fiasco was there in time to see Kwesi’s entire speech and his strong, empowered, & classy sister, Ayesha called him up to make some final remarks. He obliged and thanked us all for coming out and he expressed his excitement for all the great things his foundation has in stored. Chicago’s own superstar rapper, Lupe Fiasco had a humble demeanor and I was honored to witness his genuine presence at the Community All Call event before he headed back to the studio. I walked away from the event feeling focused and excited. I had no anxiety, I was totally calm and at peace. This means that I was at the right place at the right time, among the right people. There was a point where I was center of a circle discussing my company and my mission and all the women in the circle were attentively smiling and knodding their heads like they felt me. I loved that! I felt like what I have been dreaming for years, was not in vain. This interaction motivated me to go even harder.  I can’t wait to use the things that I have learned and to collaborate with the other people I have met at this event to make an even stronger impact in our community.  Don’t miss the next Lupe Fiasco Foundation event! It was powerful!